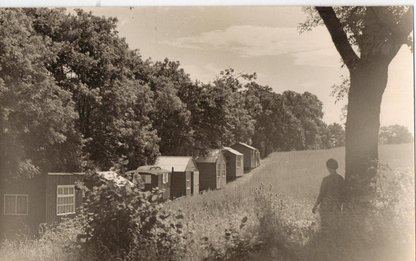 1930's to 1960's:  The story of Valley began in 1937 when a group of stalwarts who used to sunbathe near Holmfirth found a beautiful secluded site near Harrogate, and formed the Yorkshire Sun and Health Association, which unfortunately closed at the start of the war.  Post-war one of the members got in touch with previous members, and they returned to the site at Harrogate, establishing themselves in the field next to the site used by YSHA.  Valley Sun Club was formed!  A period of hard work resulted in the erection of chalets, the excavation of a swimming pool, and games courts being laid down. The Tucke Inne and the Sleepe Inne were erected, along with the pavilion Liberty Hall.  The Club grew rapidly, another five hectares of land were added to the site, and there was a long waiting list so more chalets were added, along with caravans.  Piped water was laid on to the site, and the pool improved.  A hard road was made through the fields to the site.

In 1962 Liberty Hall fell victim to the strong winds which can still be a problem on the Valley site, and a new pavilion was erected.  Winter activities were organised - film shows, and parties, so that members continued to meet during the winters.  The Club went grew in numbers and the waiting lists grew longer.

In the sixties, seventies, and eighties the Club flourished and new facilities were built including a sauna and a new clubhouse.  In the 1990's the pool had to be closed to meet the new Health and Safety legislation, and families grew up.  The older members continue to meet and kept Valley flourishing, but with the sad demise of the sauna and clubhouse, membership started to decline.  Various trials and tribulations followed, but now Valley has a lovely new clubhouse, a new shower block, and increasing membership and once more will go from strength to strength. 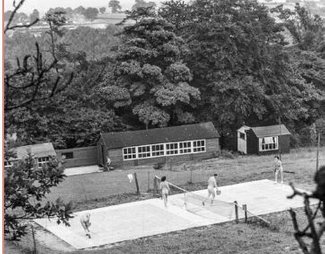 All copyrights on this site, photos, graphics, text, etc. are owned by the by the original creator and cannot be used without the owner's consent. For further information please use the Help and Comments contact form.